The State of SMBs and IoT

The Internet of Things is growing exponentially as organizations of every size take advantage of its capacity to accelerate processes, while making them simultaneously more efficient. In many cases, organizations begin with these limited goals and find their businesses reoriented in previously unthought-of directions by the possibilities of the IoT.

However, even as many SMBs adopt some elements of IoT, full-scale adoption hasn’t happened yet. Why are SMBs using IoT, what kind of IoT are they using, and what’s holding them back from a fuller deployment of this transformative technology? The answers lie ahead, but first, let’s define our terms.

IoT is the Internet of Things: networks of usually small, low-powered devices connected to each other and to the internet. Think of it as anything that isn’t a computer or a phone, but can communicate with another device.

There’s no certain definition of ‘SMB’ that consistently makes sense. In this post, we’re using it to mean a small business that isn’t a startup. The US Small Business Administration’s Office of Advocacy defines the term as ‘an independent business having fewer than 500 employees.’

Advantages of IoT for SMBs

SMBs can derive a lot of the same benefits from IoT as larger organizations. IoT can make operations faster, and more efficient in terms of resources and time. When waste falls, speed rises, and quality increases, businesses pay attention. IoT, properly implemented, can do all that and more. But larger enterprises are likely to get disproportionate benefit from improved efficiency, because economies of scale are their trump card already.

One of the key advantages of IoT for SMBs is that it’s a relatively new technology. New technologies tend to benefit smaller companies more, and this is especially true of digital technologies. Jumping on a new technology and leveraging it effectively can turn a tiny startup into a global behemoth. (Just ask Google.) SMBs that judiciously apply IoT solutions to ‘sticky’ points in their processes can position themselves for market dominance by outcompeting others in their space.

But IoT also offers solutions to several problems that SMBs disproportionately suffer from, including:

Every business involves processes that invite human error. In fully-digitizable businesses that take place ‘inside computers’ because they involve creating and manipulating images and documents, this has been already addressed through the use of technology. If I make an error typing this document, no fewer than three programs are waiting to catch it. Salespeople use digital CRMs and automated dialing through VoIP solutions; insurance companies approve or deny claims at volume using AI and standardized forms.

But for many businesses that unavoidably operate in physical reality, such as manufacturing, warehousing, transportation, the garment industry and more, basic issues like accurate stock-keeping are still unsolved. They’re done late, done inaccurately, or not done. Quality control can be poor, and the business might lack the capacity to find and implement tools to make it better. They can’t hire more staff, or better staff, or train the ones they already have. Many SMBs operate on tight margins and with constrained access to capital.

IoT offers these businesses a way to automate processes that involve ferrying information around the system rapidly and accurately, something that humans are notoriously bad at. Something as simple as barcode scanning can eliminate human errors of misclassification and data transcription: just watch what happens in the supermarket when the barcode scanner stops working. Checkout staff have to find each item on the system, then manually type in long strings of data. Unsurprisingly it takes forever and isn’t very accurate. Many SMBs have a process like this somewhere inside them that bottlenecks their whole business.

SMBs often can’t afford to hire new staff, bring in management consultants, or buy new capital equipment. How can they increase productivity? One simple way to drive productivity is to reduce waste; another is to achieve greater workflow efficiency. But it’s difficult to do those things without affecting workflow speed and overall productivity. You can’t make an omelet without breaking eggs; you can’t run a production line without creating swarf, rejects, seconds, and offcuts.

However, you can radically reduce the amount of waste generated, improve efficiency and improve quality, all at the same time, with IoT technology. The American Society for Quality found that IoT solutions help boost overall customer satisfaction rates by 45%, produce 49% fewer defective goods, and achieve 82% higher workflow efficiency.

Safety is a key business concern. It encompasses staff safety, consumer safety standards, and the physical integrity of business premises and facilities too. Yet, it’s one of the first concerns to be diminished when tasks are urgent. Many SMBs operate with insufficient knowledge of safety standards, and it’s common to have insufficient insurance and protection against damage by flooding, electrical faults, temperature fluctuation, or power cuts.

IoT networks can help SMBs protect themselves against these by providing early warning and real-time information about the state of the business, its environment and its property. IoT devices at entrance points can provide information about unauthorized access. IoT-enabled locks can manage access remotely. IoT sensors can alert business owners to potentially-dangerous changes in their environment such as temperature or humidity fluctuations.

IoT is already firmly inside American small businesses. And we’re likely to see adoption accelerate. Why? Because 46% of businesses that adopted IoT strategies, and 83% of those adopting the technology, saw efficiency gains — though only 29% expected them. This is the opposite of the hype cycle: businesses are being convinced on the ground without buying into the theory at all.

Since enterprises are overwhelmingly more likely to appear in a study of tech decision-makers, and to have an adoption strategy for new technologies, we can extrapolate from this that SMBs are both adopting the technology, and benefiting from it, at significant rates. In fact, that’s true of 94% of American businesses — up from 2018 when just 47% of businesses surveyed by Capterra were using IoT.

How are SMBs using IoT now?

There’s usually a large margin of overlap between the tools and technologies in use in SMBs and what’s available for consumers, with the caveat that SMBs often adopt new technologies slower than consumers. The next step is usually to use small, inexpensive subscription tools that often blur the line between repacking consumer tools for businesses, and vice versa.

This matches the picture we see of IoT implementations in SMBs currently. The closer an IoT technology is to being purchasable as a standalone device from a consumer store and simply connected to the rest of the company over a normal internet connection, the more likely SMBs are to use it. A close second is tools for analysis within processes that are already digitized.

The most-used IoT devices in the USA are connected cameras, which also represent a common avenue of cyberattack when they’re improperly configured. Other common SMB IoT devices include printers and lights; examples of consumer IoT making its way into the small business premises in the same way as other emergent technologies. Meanwhile, Harvard Business Review finds that 58% of organizations that use IoT in an office setting see an increase in collaboration. That underscores the growth of ‘replacement IoT’ — networked devices and applications that quietly take the place of their predecessors when it’s time for an update or replacement.

There are also companies retailing SMB-friendly subscription packages for IoT devices and networks. MyDevices Inc. bundles and sells IoT-as-a-service, and is both growing its user base and attempting to develop a marketplace for third-party vendors.

O’Donnell mentioned the example of local fishermen in New Bedford, MA, who were using a simple network of sensors and cameras to meet regulations without drowning in red tape, as well as small-scale vintners using tiny weather stations to manage their operations in response to their local conditions.

‘To be clear, these aren’t eye-popping, world-changing ideas or innovations,’ O’Donnell explains. ‘In fact, most of them are pretty simple and arguably, pretty boring, especially if you’re not familiar with the day-to-day needs of these kinds of vertical industries.’

However, the results are far from boring for the business owners whose daily work and bottom line can both be transformed.

What’s holding SMBs back from adoption of IoT?

As of 2020’s CNBC/SurveyMonkey Small Business Survey, 44% of SMBs were planning to invest in IoT technology — but just 20% were planning an increase in investment in cybersecurity.

This disparity points to something deeper. For many SMBs, poorly-configured IoT devices are an ingress to their core IT systems because the two are too seldom segregated.

SMBs aren’t blind to the problem: 42% of businesses cite ‘difficulty managing security’ as a key challenge to IoT implementation. They’re right to see threats lying in wait: 43% of cyberattacks target small businesses, with 52% of breaches coming from hacking.

SMBs have a pre-existing cybersecurity problem that they don’t want to compound with insecurely-implemented IoT. In many cases, the security question will come first.

However, it’s not the only obstacle. There’s a lack of clarity on prioritization, and some SMBs may feel that their business can’t benefit from IoT’s advantages. IoT is an underskilled space, with few specialists — and even fewer working with SMBs. Business owners have difficulty finding specialists who can help them implement their IoT solutions, and may struggle to assess candidates.

In up to three-quarters of cases, the main barriers to adoption were difficulty convincing the rest of the company’s decision-makers of the value of IoT, and difficulty identifying a clear pathway to that value: 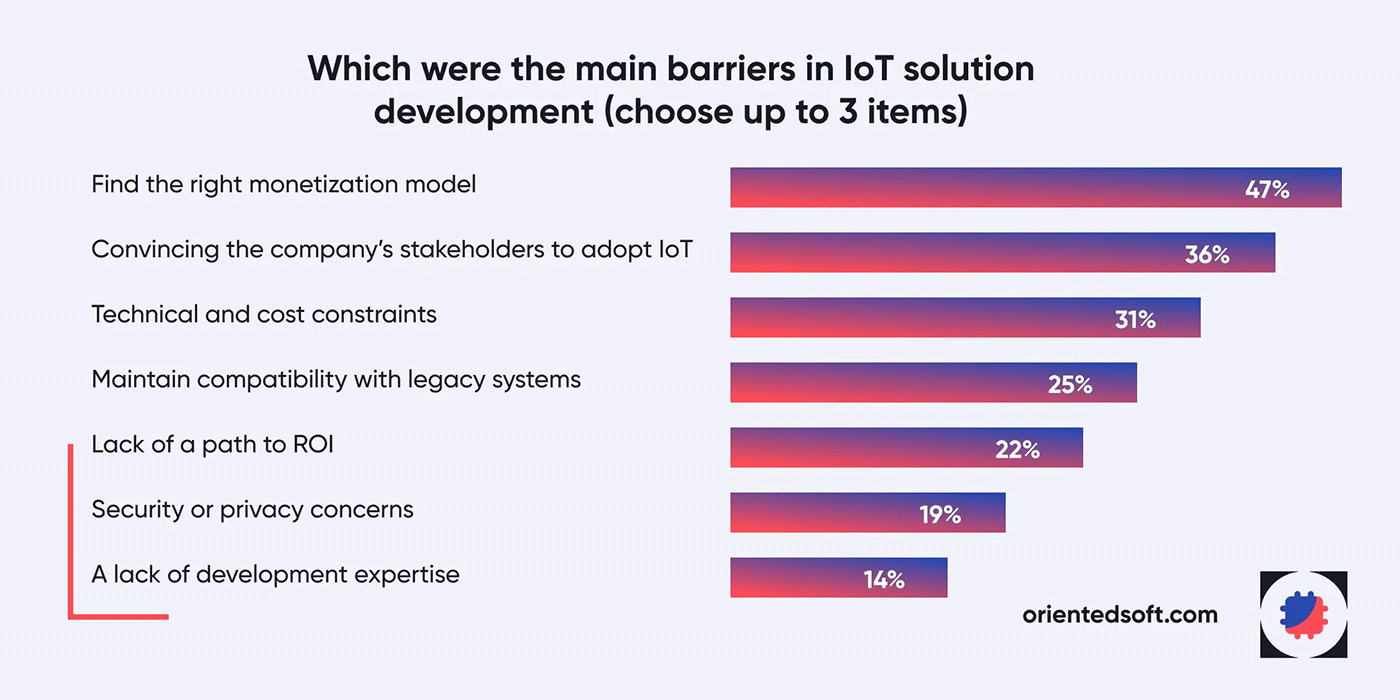 SMBs frequently lack a strategic approach. They’re always busy with the day-to-day, and there’s no one in the business whose job it is to look ahead. And they’re more likely than enterprises to be using older legacy software that may not stack that well. Planning and implementing the process of adding another layer might seem daunting, no matter the promised benefits.

How can AndPlus help?

We’ve helped businesses of all sizes to build IoT implementations and applications, working with them to select devices, architect networks, and develop solutions that improve results across the organization.

In the process, we’ve grown a skill set unique in the industry, bringing business and technical understanding into focus on the same issues to create tools that are both functional and innovative.

AndPlus is ideally placed to help match IoT solutions with business goals and design networks and applications that deliver on the technology’s promise, clearly and securely. 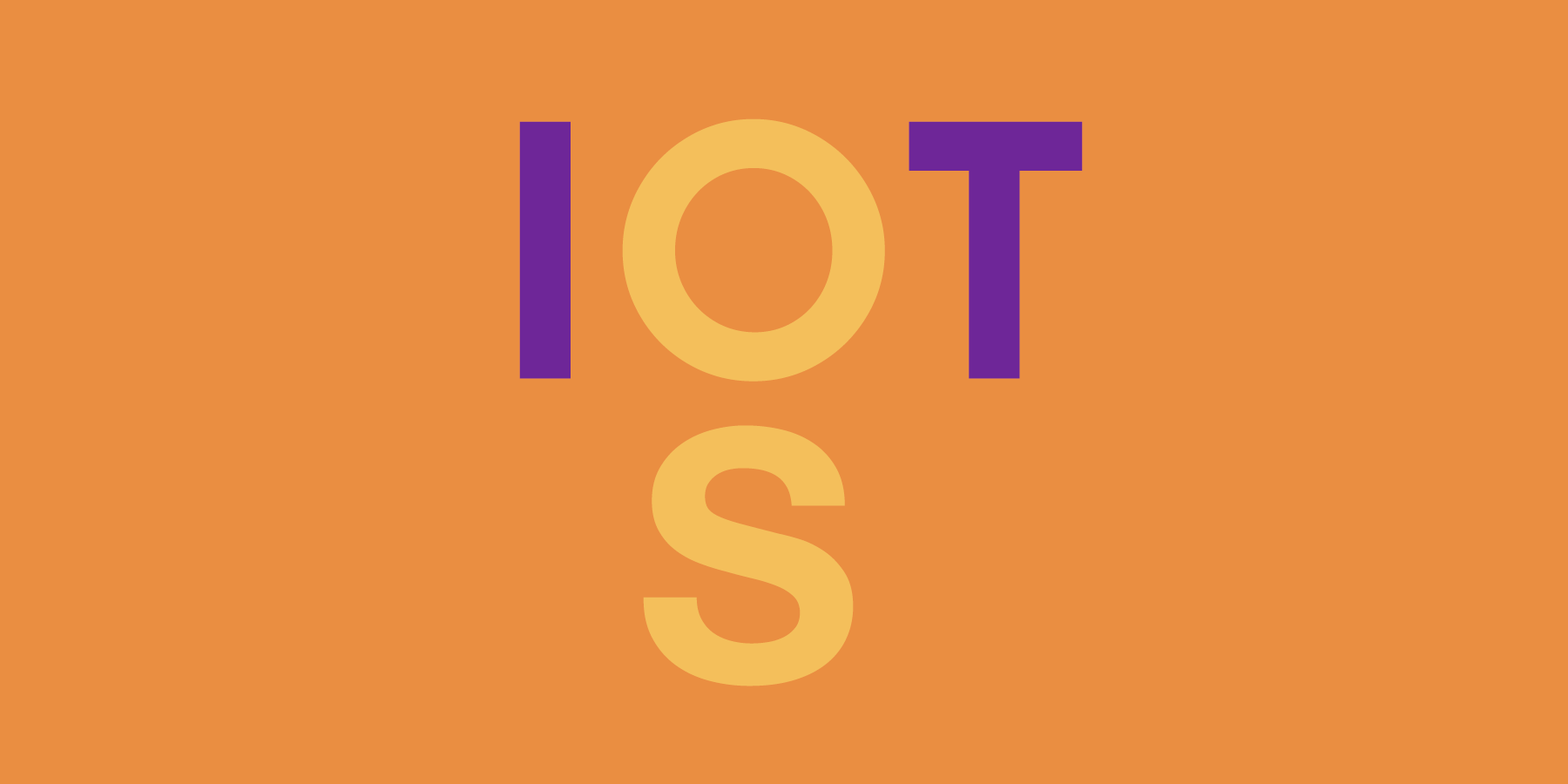 Which Operating System Should You Use for Your IOT Solution?

The AndPlus Guide to IoT Frameworks