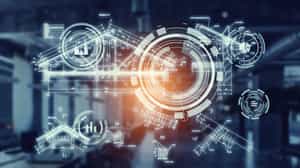 Humankind had been cooking rice for over 12,000 years before someone had the bright idea of automating the process with rice-cooking appliances. (Why we needed to automate a process that runs mostly without human intervention anyway is a debate for another time.) Although the electric rice steamer (some models of which could be considered “robots” in the broadest sense of the term) didn’t revolutionize the culinary arts the way, say, fire did, it’s just one small example of the surprising application of technology in an area one might not consider “high tech.”

New technologies—especially the ones we at AndPlus are excited about, such as robotics, machine learning, and the Internet of things (IoT)—are now making inroads in industries that you wouldn’t normally think of as high-tech, or even open to high-tech solutions. These are industries that existed for hundreds, if not thousands, of years without the aid of so much as a handheld calculator.

But few industries can resist the siren call of increased productivity, efficiency, and profitability afforded by these modern technologies, and many of them are adopting new gadgets and systems at a furious pace. Let’s have a look at some of them.

The lumberjack’s life would seem, at first glance, to be fairly simple and straightforward. The Monty Python crew summed it up nicely in “The Lumberjack Song”: “I’m a lumberjack and I’m okay, I sleep all night and I work all day / I cut down trees, I eat my lunch, I go to the lavatory.” But forestry is actually much more complex, especially in recent years as conservation and sustainability have become such important aspects of the trade. Forestry has started using high-tech systems to manage the entire production cycle, from planting seedlings to delivering logs to sawmills:

The farm tractor has come a long way from its humble beginnings and is now a high-tech marvel, complete with GPS navigation for precision farming. Soon there will be fully autonomous tractors that do everything from plowing to harvesting without requiring a farmer in the driver’s seat. Other ways that technology is transforming agriculture include:

Long-haul trucking is one of the most tedious jobs on the planet: Long, lonely, mind-numbing hours behind the wheel, with weeks away from home. Recent laws in the U.S. that restrict the number of hours truckers can drive without rest may have increased safety, but have reduced driver productivity and increased costs. All of this points to an expected near-term shortage of truck drivers—a labor gap that could be filled by robotics.

Semi-autonomous (i.e., teleoperated) or fully autonomous trucks could ply the interstates for longer stretches, stopping only to refuel. Human drivers would take over and apply their skills where they are needed most: The roads and streets between the interstate and the warehouse, distribution center, or customer’s loading dock. Several companies, most notably Tesla Motors, are working on various levels of automation in trucking.

The Tip of the Iceberg

These examples show that no old-school industry is so set in its ways that it can’t realize benefits from modern technologies. Blockchain, machine learning, robotics, and other cutting-edge technologies will continue to find their way, individually or in combination, into traditional processes and industries in ways that no one has even imagined yet.

Not every application or development will succeed, of course, and some will succeed in unanticipated ways. But visionaries who see how these technologies can improve productivity and reduce costs will find ways to make them work. At AndPlus, we’re ready to apply the technologies to help those visionaries bring their visions to life.