From Concept to Design: Alternative Ways to Prototype 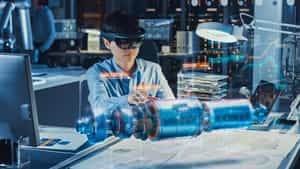 One of the great innovations of the modern age—something even more useful than the beer-can hat—is mapping applications such as MapQuest and Google Maps. Not only can they show you the fastest way to get from A to B (accounting for traffic, construction, one-way streets, and other obstacles), but they can give you alternatives, such as those favoring or avoiding freeways or scenic routes. Some applications will even give you the best routes for traveling on foot, by bicycle, or public transportation.

Why is this important? Because there’s no one single path from A to B that’s best for everyone. People have different goals, agendas, priorities, and budgets. Presenting multiple alternatives is a good way to provide value to the widest possible audience.

Getting from A to B by Prototyping

The same is true of product prototyping. As we’ve discussed many times in this blog, we at AndPlus use prototyping to make sure we understand our clients’ requirements and expectations for any software we develop. There are multiple ways to use prototyping to get from point A (concept) to point B (design).

Earlier in this space, we discussed four basic types of prototyping. They are:

These are high-level categories; not specific approaches (such as paper-and-pencil or advanced interactive prototyping). In today’s article, we discuss some of the more unusual approaches to prototyping. They may be a bit off the beaten path, but for particular projects and audiences, they can be quite effective.

An approach particularly useful for geographically diverse teams is the digital whiteboard, such as that provided in applications such as Microsoft Teams. Similar to physical whiteboarding, multiple participants can show their ideas, modify them as they work, (and this is the cool part) and record the working session so it becomes part of the decision-making record.

Like its physical counterpart, digital whiteboarding falls into the category of “low-fidelity” prototyping. Used in the early stages of product ideation, the prototypes produced this way are not intended to be faithful representations of the end product user interface (UI). Later in the design cycle, whiteboard ideas can be translated into higher-fidelity prototyping, such as static wireframes or full interactive prototypes.

One way to show how a UI would work without building the actual UI is by using a drawing program to represent the different states of the UI, then stitching the images together into a video to show various journeys through the software, complete with callouts and other clarifying information. Although no coding is required for this approach, it can be time-consuming. It’s also almost impossible to make changes to this type of prototype “on the fly” in response to audience feedback, so it can’t be considered “rapid” prototyping.

Video prototyping can be useful after the basic design elements are decided upon but before actual coding begins. Because it’s non-interactive and platform-independent, it can be distributed to a wider audience, which can provide general feedback.

One of the under-appreciated applications of augmented reality (AR) and virtual reality (VR) is product prototyping. This approach is more useful for prototyping physical devices than for PC or mobile apps.

In either case, the user can provide specific feedback on the usability of the device’s interface design. Are buttons and controls placed in a logical manner and within easy reach? Can the user perform tasks with the device intuitively? If required for safety reasons (such as when driving a vehicle), can the user operate the device without looking at it?

Another useful approach for physical device prototypes is three-dimensional printing. Rather than building a clay, wood, or metal model of the device, a designer can create the design in computer-aided design (CAD) software and fabricate the prototype in plastic using a 3D printer. Although it’s not an approach that would be considered “rapid prototyping,” it’s a faster and lower-cost fabrication method.

You Can Get There from Here

Software and hardware prototyping are not one-size-fits-all propositions. The best approach depends on what type of product you’re prototyping, who the endusers are, who (and where) the stakeholders are, and what stage of the development cycle you’re in, among other factors.

Fortunately, there are many effective prototyping approaches, and each can be the “best” one under the right circumstances and in the right hands.

Modern Applications of The IoT