The Internet of Things (IoT) goes a long way beyond consumer-level technology like smart toasters and doorbells. It’s being adopted across manufacturing, warehousing, supply chains and logistics worldwide. Good results often follow: 80% of IoT projects achieve better-than-expected results, according to Gartner. The same survey found that the involvement of the CIO was crucial to the success of IoT projects, not surprisingly.

Privacy and security remain critical considerations, driving $1 trillion in spending on regulatory compliance for IoT infrastructure alone, and are forecast to act as a brake on the space until at least 2025 thanks to lack of relevant skills, but IoT is going mainstream in business and industry, not just consumers’ homes.

However, IoT can be structurally complex as well as complicated and difficult to implement. Where the two come together is IoT architecture.

What is IoT architecture?

IoT implementations have a lot of ‘moving parts,’ vital components that need to be structured so as to interface with other systems and work well together. IoT architecture is a four-stage system in which information flows through three layers, from sensors attached to ‘things,’ through a network to a data center or the cloud for processing, analysis and storage.

We’ll look at the layers first.

The three layers of IoT architecture

This is the physical layer of IoT architecture. Sensors are attached to machines, buildings, products or even people, and contribute their data to be processed upstream. Issues in this layer include physical durability, connectivity and type. Businesses have to balance functionality requirements with scalability, sensor survivability, and resources, seeking to minimize expense and failure risk.

The network layer’s role is to transmit sensor data upstream to data centers or cloud-based processing and storage, meaning it faces similar pressures and challenges to other networks — but with vastly more inputs than most, and often more geographically distributed.

The application layer is the layer the user interacts with, and is responsible for delivering application-specific services to the user. In consumer IoT systems this is often very simple; in large industrial applications, there are often multiple user categories with permissioned access and role-based requirements, meaning the application layer must offer fairly complex front-end functionality. On the back end, there are often multiple data streams to analyze, meaning the back end must also be powerful and sophisticated.

Information flows through this structure in four stages, starting when an IoT sensor detects something and sends that information to the network.

Sensors and other connected objects are the first stage in the data flow through an IoT system. Without them, there is no data for the rest of the system to work with. Sensors are accompanied by actuators: if sensors are nerves, actuators are the muscles of the IoT.

They transform the data collected by sensors into physical actions, and don’t always need to consult centralized processing to do so. Just as a human body requires thought for some actions and only reflex for others, so some IoT systems allow for instant, short-range If-This-Then-That processing within a single unit.

In some cases, connected devices can communicate not only ‘up’ to the data center and ‘down’ back to the actuators, but ‘sideways’ to other connected devices, allowing limited local group decision-making to respond to local circumstances rapidly. Such implementations rapidly encounter bottlenecks in battery life, processing power and connectivity, meaning they usually turn to secure, lightweight communication protocols designed for the purpose. Major computing can also be done near the level of data generation — see Stage 3. Information is also passed upstream for analysis and storage.

The gateway and data acquisition layer functions in close proximity to sensors and actuators, but remains a separate layer demanding separate consideration.

Gateways contribute by converting the data collected by sensors into formats that can be processed by the rest of the system. In large IoT deployments that can involve a million sensors or more, this layer is under pressure to aggregate, select and transport large quantities of data — and those quantities will likely increase rather than decrease in the future, as IoT systems become more vertically and horizontally connected.

Gateways are also central to security because they are responsible for managing information flow in both directions; they’re the portals from a single sensor to the system as a whole, and with the application of the proper security and encryption tools they can help prevent both cloud data leaks and IoT device attacks.

Edge computing is not an inevitable component of an IoT architecture, but it does make a significant contribution, especially to large-scale IoT projects. Even the best cloud platforms have limited speed and centralizing all processing can reduce the speed and agility of the system as a whole. In these circumstances, edge computing can provide significant acceleration.

Edge infrastructure moves computing as close as possible to the data source in physical terms, meaning reduced strain on networks and faster response times. N situations where decisions must be made quickly, limited edge computing power is of more value than gigantic but slow-moving cloud computing power.

Edge computing can also contribute to security by reducing data flow through the network, and to efficiency by reducing pressure on power, bandwidth, and other resources.

Increasingly, IoT is happening on the cloud — a natural synergy. Cloud-based IoT control centers store, process, and analyze the vast quantities of raw data produced by IoT implementations, looking for patterns that could reduce waste, increase efficiency, and drive profitability and ROI. Doing this at scale, with the quantities of data produced by IoT, means using large-scale, powerful and sophisticated analytics engines and machine learning tools that could not be supported locally by edge computing.

Specific IoT setups that meet your requirements are unlikely to be available off the shelf. What is likely to be easily available are the components to construct an appropriate architecture. IoT components, from sensors on up, are designed with flexibility in mind, with the usual double-edged result that you can turn them into anything you want — if you know how.

It’s best to think of IoT as a framework, not a specific tool or solution; a methodology, not a method. With the right components, architecture and software, IoT implementations can be designed to both address existing problems, and create previously impossible benefits, including:

IoT gives businesses access to a gigantic amount of data about exactly what is actually happening, not what happened three months ago or what managers report as having happened. This data would be unusable without the availability of ML-enabled analysis, and some would be unusable without edge computing to supply responses in time. However, with both, businesses can identify deeper, more meaningful patterns on which to base decision-making, leading to business opportunities that would have been inaccessible without IoT.

Collected data can be used to identify historical trends allowing prediction and pre-emptive action. For example, warranty information and maintenance data can be paired with IoT-collected data to predict which customers will require which maintenance. These customers can then be offered value-added services that drive loyalty and reduce costs to both them and the business.

IoT lets you set up and roll out new products and services in response to changing circumstances, often quickly and with better targeting and a greater likelihood of success. Data collected by IoT devices can be used to help predict what customers need, and the planning and delivery of revenue-generating offerings can be accelerated. IoT-derived insights can be fed back downstream to other parts of the organization that don’t use or otherwise interact with the IoT deployment, such as sales and support, enabling them to more accurately target prospects’ pain points and customers’ needs.

IoT improves operational control at the granular level, improving data visibility, automating some aspects of operations management and increasing visibility of anomalies. This lets businesses spot problems while they’re small and deal with them.

Specializing in application layers for business IoT, AndPlus has created custom solutions across multiple niches. These are a few examples.

Building Automation and Control nets (BACnets) use wired hardware to monitor and control building systems. In turn, these systems are monitored and supervised by human property managers or building managers.

Alerton knew their end-users were on the move through the day, but their building automation controls were tied to immobile desktop applications and legacy wall-mounted display hardware. 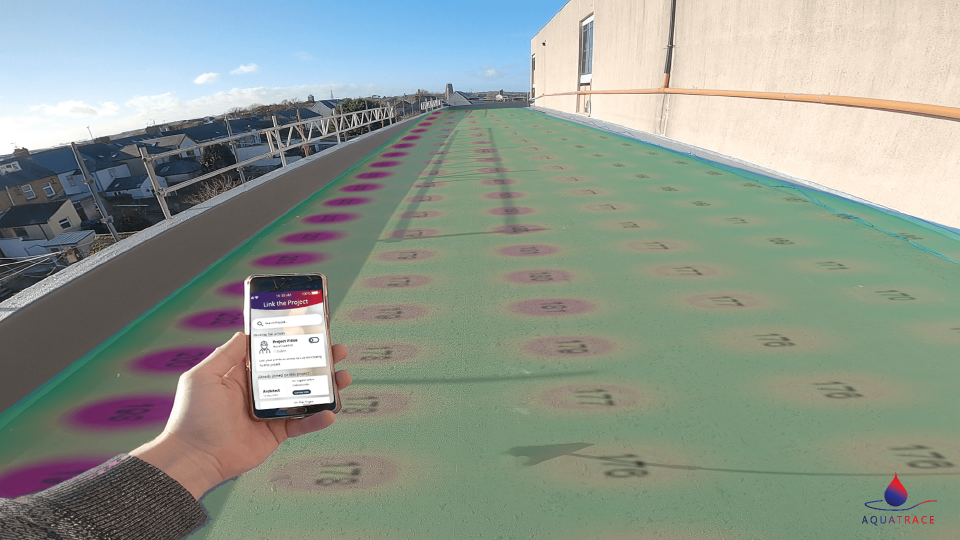 Aquatrace Monitoring System is an insurance policy and automation product that sends roof status data to the cloud for analysis, to provide leak protection. If there is a leak, subscribers are alerted in real-time, with contextual location data to improve asset protection and reduce insurance premiums.

AndPlus initially worked with Aquatrace to develop a thorough understanding of their end-users, process workflow and product vision. We then began adding backend platform functionality to support this, based on user journey mapping, solution prototyping and wireframing.

Generally, as building airflow control systems become more complex, their maintenance costs rise. Phoenix Controls manufactures valves that are commonly found in hospital rooms and laboratories, providing reliable space pressurization to help with infection control — and which require virtually no maintenance for the entire life of the building.

While their core product is advanced and effective, Phoenix’s user controls felt antiquated by contrast. AndPlus created a custom touchscreen interface to give users insight and control of their Phoenix Controls implementation, and this solution is now installed in hundreds of Phoenix Control’s client hospitals worldwide, providing users with easy access to high and low limits, occupancy, alarm status and other key data. The touchscreen interface makes control intuitive and information clear.

The company partnered with dealers to install and program VFD units. In order to ensure quality and consistency, NextRev needed to automate and monitor more of the setup process — an IoT application layer AndPlus was pleased to build for them.

This software gathers relevant data, analyzes it, and programs the VFDs automatically, with little user interaction. It also requires dealers to submit photographs of the installation site, to protect NextRev’s reputation.

IoT requires a depth and breadth of skill ranging from software development and testing, through architecture and device selection, to business-oriented consulting to ensure your IoT implementation matches your needs and goals.

At AndPlus, we’re experts at developing IoT applications and integrating them with IoT devices and platforms. We’ve designed and implemented IoT architecture for businesses in multiple industries, helping organizations extend their digital transformation to the physical elements of their business.

Extensive experience is valuable not just for what it enables us to do, but for what it lets us avoid. IoT implementations can fail through unanticipated complexity, poor technology selection, or failure to appreciate the heterogeneity of a company’s shop-floor and other operations. We created a handy guide to the Internet of Things to help clarify some of the issues around IoT design, development and deployment.

Why You Should Have an Experienced Firm Handle Your Data Migration

Digital Experience Innovation, Not Features, Is the Key to the Future